News Concert inauguration of the ‘Your Heart Your Life’ project

Concert inauguration of the ‘Your Heart Your Life’ project

About the importance of health in the life of every human being everyone could convince during the conference, which was organized on 24 January 2016 in the Municipal Cultural Centre in Wola Krzysztoporska by the local government of Piotrków Trybunalski district. 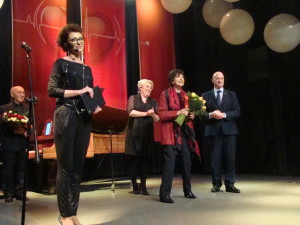 Sunday’s event inaugurated a health prevention program ‘Your Heart, Your Life’. The project aims to promote a healthy lifestyle, by bringing the risk factors for cardiovascular disease to people attention. The county government has invited solid partners to participate in the program: municipal governments, community organizations, such as the Farmer’s Wives’ Association and Sports Clubs, as well as Social Welfare Centre and Commune Health Care Complex in Piotrków Trybunalski. As Starost Stanisław Cabała stressed in his speech on medical care (health centers and hospitals) can influence only in 10 percent on our health. Not everything depends on doctors and nurses. According to Professor Wojciech Drygas Head of the Department of Preventive Medicine, Medical University of Lodz, everyone should seriously look at the analysis in which Piotrków Trybunalski district ranks on the top of national list of cardiovascular disease morbidity. – That is why I congratulate the authorities of the county that have prepared such a good project that received funding from the Norway grands and the state budget – the professor Drygas said. – This is a great chance to change the current bad eating habits, get rid of the smoking addiction, as well as ensure good health through physical activities.

Soon, in all the communes of Piotrków Trybunalski will commence after three Academies: Good Counsel, Movement and Healthy Nutrition, which will be launched m.in social assistance centers, the functioning of rural community centers and sports clubs. Starost together with the Chairman of the Council of Piotrków Trybunalski District Paulina Dziadczyk handed the statuette for 25 representatives of associations and informal groups, which, through their projects promote healthy lifestyles, local traditions, including the culinary, and environmental attitudes. The event was graced by performances by the TSO Brass Band of Longinówki, the team of ‘Mali Piotrkowianie’ from Bl. Edmund Bojanowski Non-Public Kindergarten in Piotrków Trybunalski, Song and Dance Ensemble Gorzkowice and star of the evening was a great duo Halina Kunicka and Czesław Majewski.

In addition, thanks to the nurses from Commune Health Care Complex in Piotrków Trybunalski all invited guests could benefit from the medical point in which everyone could measure the pressure or blood sugar levels and participate in refreshments, which was composed entirely in accordance with the principles of healthy eating.

The conference was co-financed by Norway grants and the state budget as a part of the Programme PL13 Reduce Social Inequalities in Health.